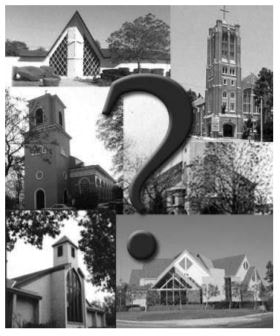 How to Choose a Church

The religious freedoms we enjoy in America have given rise to a variety of churches from which to choose. Because of the many options, the important decision of choosing a church can be difficult and overwhelming. The prevailing attitude is “attend the church of your choice.” The problem with that is our criteria for “the right church” may not be the same as God’s criteria.
God's Desire
The Lord desires unity among believers. Jesus prayed, “I do not pray for these alone, but also for those who will believe in Me through their word; that they all may be one, as You, Father, are in Me, and I in You; that they also may be one in Us, that the world may believe that You sent me” (John 17:20- 21). The apostle Paul commanded, “Now I plead with you, brethren, by the name of our Lord Jesus Christ, that you all speak the same thing, and that there be no divisions among you, but that you be perfectly joined together in the same mind and in the same judgment” ( 1 Cor. 1:10). Jesus and the apostles were against division. The Lord did not plan nor desire this for His church.
Departure Foretold
Paul warned Timothy, “For the time will come when they will not endure sound doctrine, but according to their own desire, because they have itching ears, they will heap up for themselves teachers; and they will turn their ears away from the truth, and be turned aside to fables” (2 Tim. 4:3,4). When the church was first established all Christians were united with the same name, teachings, and practices (Acts 2:44). Unfortunately, departure from the divine pattern gradually came to pass. People were no longer satisfied to be simply Christians. They wanted something more.
The Reformation Movement
Departure from Jesus' church continued with little challenge until the 1500s when the Reformation Movement began. Some were dissatisfied with departures from Bible teachings. They wanted to reform religion and clean up some of the corruption. The corrupt religious leaders did not welcome this reform movement. Thus, the reformers were forced to either give up their efforts or forced out of the religious establishment. This marked the beginning of denominationalism. However, these early attempts to clean up religious corruption did not go far enough.
The Restoration Movement
In the late 1700s various men such as Dr. Abner Jones, a Baptist preacher (1780), Elias Smith, a Baptist preacher (1789), James O'Kelly, a Methodist preacher (1793), Barton W. Stone, a Presbyterian preacher (1807), Thomas Campbell, a Presbyterian preacher (1807) and his son Alexander Campbell, along with others, were unhappy with the incomplete efforts of the Reformation Movement. They believed that members could, by looking to scripture alone, simply be Christians without being bound to human traditions and the denominations. The goal was not to reform a corrupt system but to restore the church found in the Bible. Achieving this goal required using Bible words in Bible ways, rejecting man-made names, creeds, doctrines, practices; and speaking where the Bible speaks while being silent where the Bible is silent.
The Restoration Movement and the Bible
Those men who desired to restore the church that Jesus built found strong Bible support for their goal. They read verses such as, “But even if we, or an angel from heaven, preach any other gospel to you than what we have preached to you, let him be accursed” (Gal. 1:8) and, “Brethren, join in following my example, and note those who so walk, as you have us for a pattern” (Philippians 3:17, see also Rom. 16:17; 2 Thess. 2:15; and 2 John 9). Those preaching for the restoration of the church understood this simple fact: Departure from the pattern was wrong in the first century and it is still wrong today.
Christians in the Early Church
Those who were trying to restore the church that Jesus built studied the Bible and found a simple design. The first century Christians believed that Jesus' blood washed away sins (Eph. 1:7). To them the gospel was something to obey not just merely believe (Rom. 10:16; 1 Peter 4:17). Further study revealed a simple plan of salvation. Converts in the first century...
Worship in the Early Church
The worship in the early church was also very simple (Jn. 4:23-24). The church gathered every Sunday (Acts 20:7). Their worship consisted of...
Can it really be done today?
Is it possible to restore the church that Jesus built? Our success is based on a simple principle: seed produces after its kind. If we plant the same seed that was planted in the first century, then we will get nothing more or nothing less than the church that Jesus built (1 Pt. 1:23). In other words, you reap what you sow (Gal. 6:7-8).
Is it really safe?
Some people might be uncomfortable with the idea of throwing away creed books and discarding all the changes that men have made to the church. To some this might sound like a radical idea, but it's actually God’s idea (Mt. 15:13; Gal. 3:15; Rev. 22:18-19).
How would God choose a Church?
When searching for a place to assemble with others, a place to learn about and worship God, we must seek out the church of His choice. Our personal preferences should take a back seat to what God expects from the church. What would Jesus want His church to be called? How would Jesus want His church to worship? How would Jesus want His church to be organized and function? What would Jesus want His church to teach and practice? The answers are given to us in the pages and patterns of the New Testament.
The Movement continues!
There are congregations today that share this same restoration desire. They want nothing more than the pure Christianity taught in the Bible. They reject all man-made names, creeds, doctrines, and practices. If you would like to learn more about the church that Jesus built, we invite you to enroll in our free Bible study today.